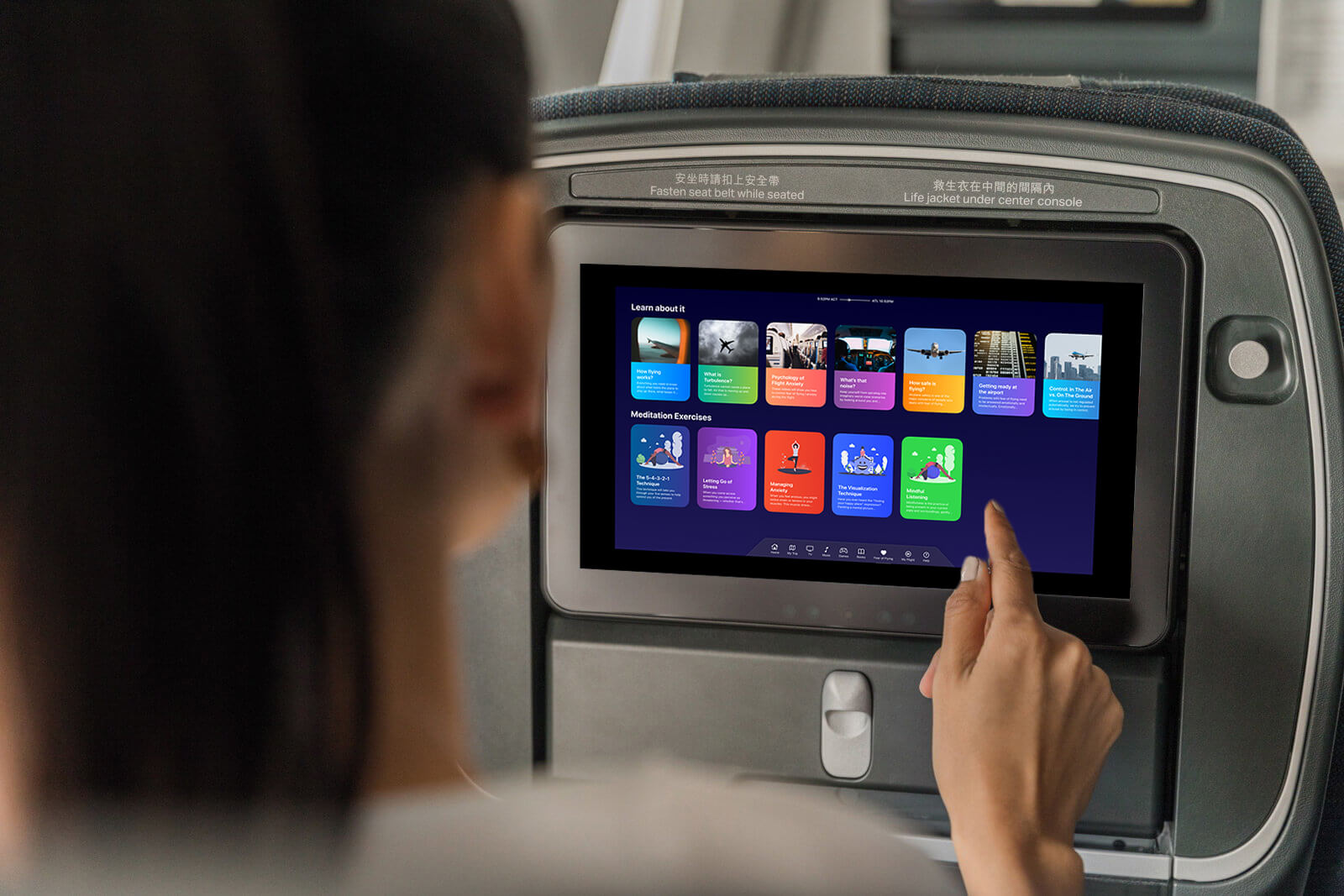 At the end of 2019, I was flying from Buenos Aires to Los Angeles when -after flying for almost three hours- the crew announced that we were returning due to malfunctions on the aircraft. Once we were back at the airport, they announced the flight would be postponed for the following day. I was on my way back home -frustrated and bummed because of my lost time- when I wondered: What would happen if I was afraid of flying? Would I take the flight even if I know that the airplane wasn't working as it should? Spoiler alert: I took the flight - nothing happened. But this whole situation made me think about it and I wondered...

How might we minimize fear of flying on passengers within the in-flight entertainment experience?

The main goal was to understand what fear of flying really is, as well as knowing what passengers might need out of the in-flight entertainment experience. As part of my desk research, I chose to study what other airlines/apps are currently doing by competitive analysis, conducting surveys and analyzing social media, especially since the huge amount of data available online makes it a perfect tool for identifying specific experiences and it can provide vital insights about our users. This included the analysis of interviews made on passengers by news outlets like ABC or The New York Times, together with the analysis over the most relevant comments on YouTube and an exhaustive social media listening over Reddit, Facebook, and Twitter.

The National Institute of Mental Health states that as many as 12.5% of Americans will struggle with a phobia. Of these, a fear of flying or aviophobia is one of the most common, with an estimated prevalence ranging from 2.5% to 6.5% of the population. My hypothesis was right, fear of flying is a thing. But what's the actual chance of having an accident while flying? According to a new study by an MIT professor, it has never been safer to fly on commercial airlines, with a rate of one death per 7.9 million passenger boardings.

Wow! That means you'd have to fly on average once a day every day for 22,000 years before dying in an airplane accident!

After organizing all collected data -including surveys, social media comments, and advice from experts- I was able to extract several insights across all my research. The ones that stood the most were:

To show the diversity of passengers who might struggle with fear of flying, I created personas for each type of passenger I encountered during my user research. 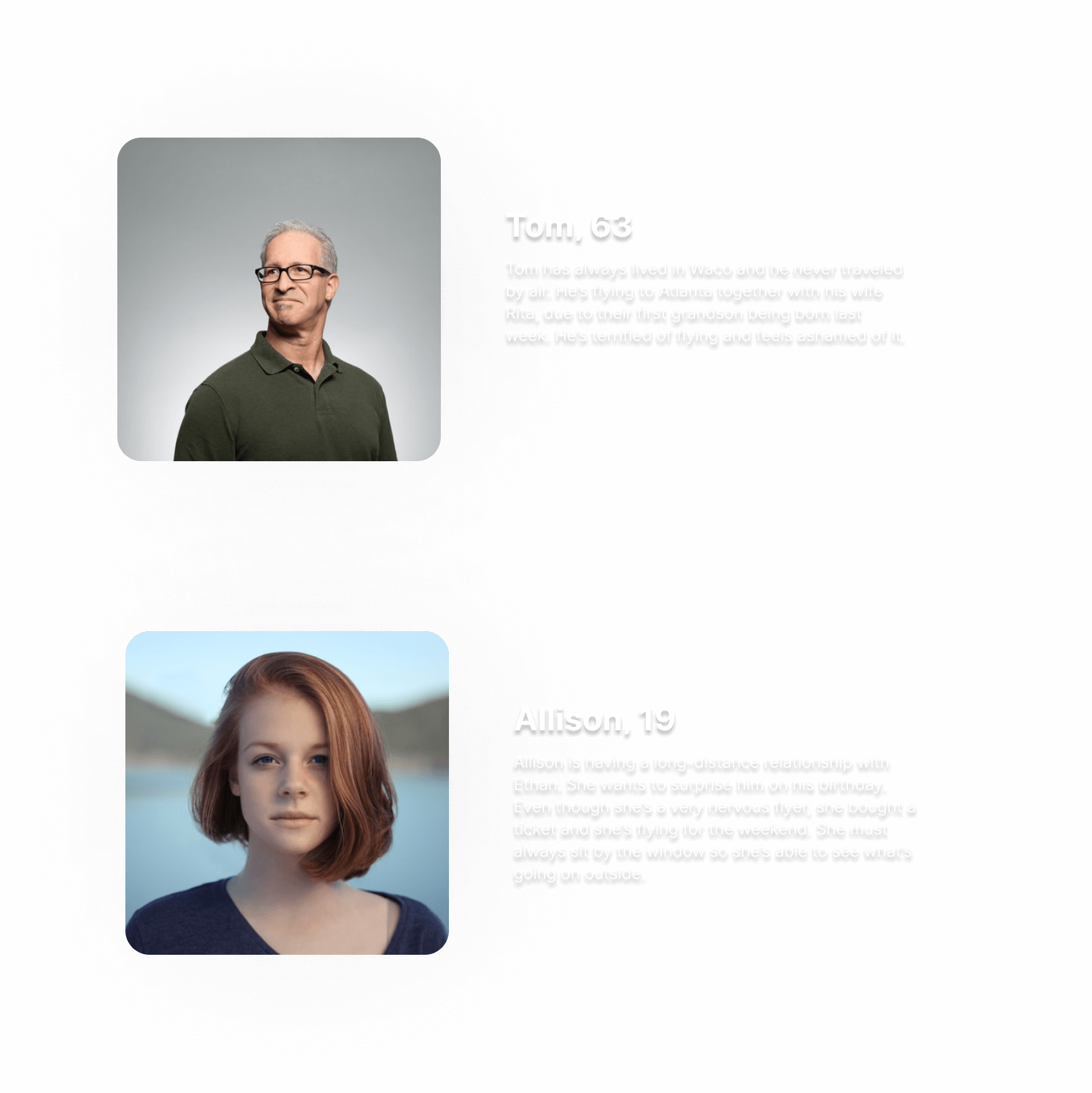 Now we're talking: I know what fearful fliers need to feel better, so now it's time to make a good design out of it. Keeping my insights and user persona in mind, I started with making a flowchart with post-its to organize all the features that the in-flight entertainment app should have. Then, I followed with sketching some low fidelity wireframes on paper which looked like this: 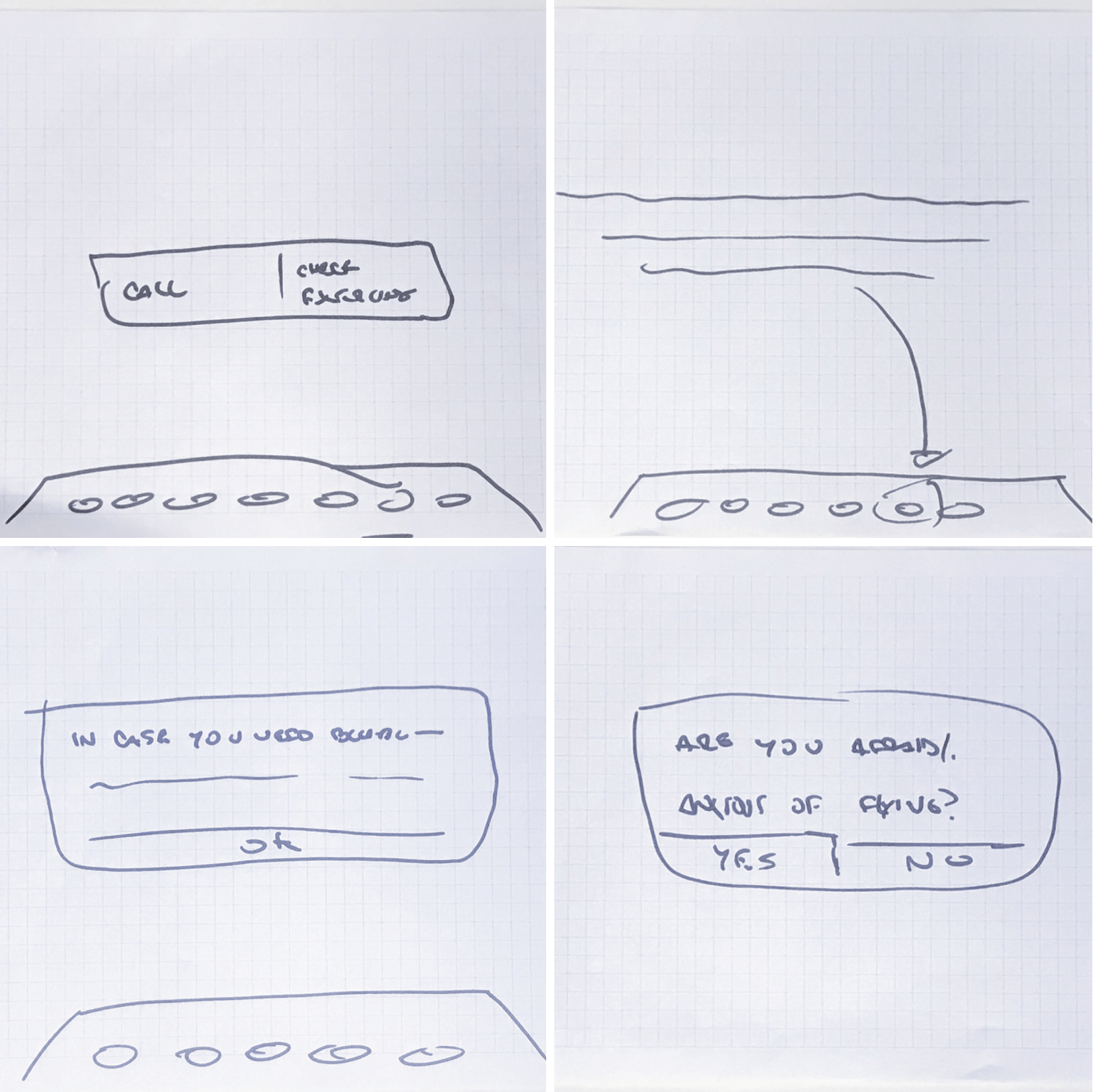 This is was the first idea I sketched out.

Based on my first sketches and the key insights found during research phase, I made a high-fidelity prototype using Figma. And this is how it finally looks like!

When onboarding, a popup alert lets all passengers know there is a feature for helping them with their fears, while also reminding them the crew is ready to assist them with anything they might need. 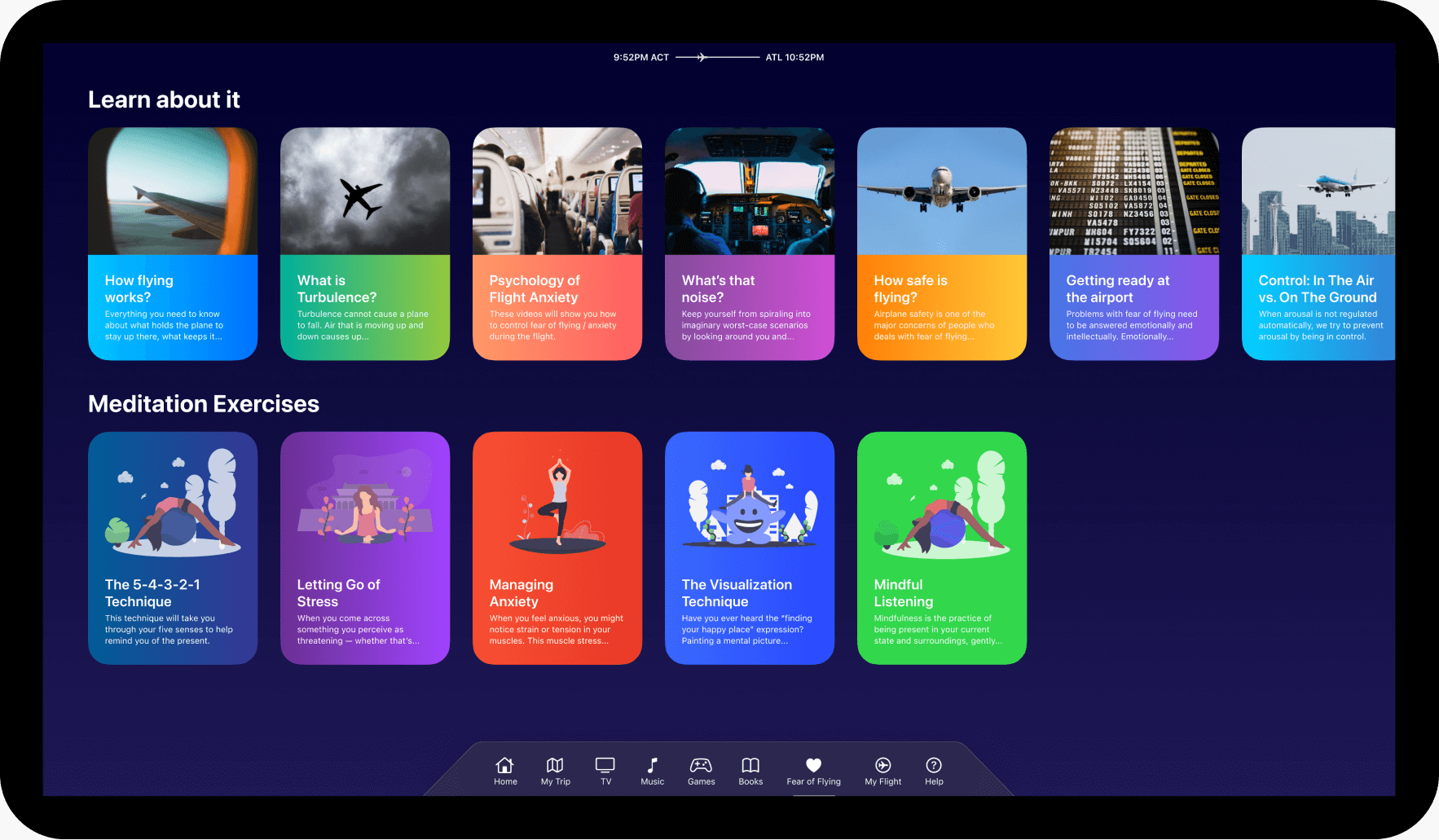 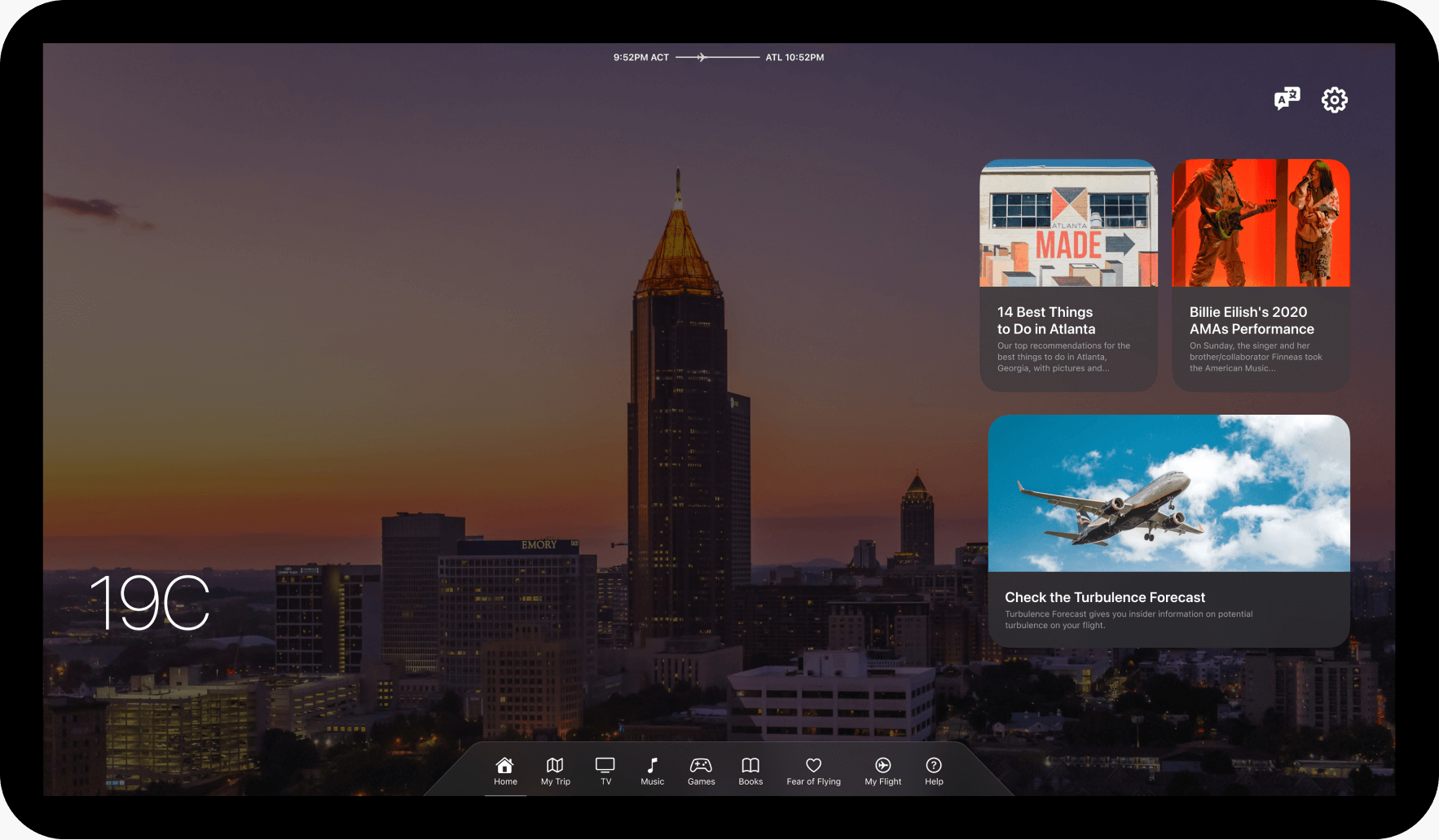 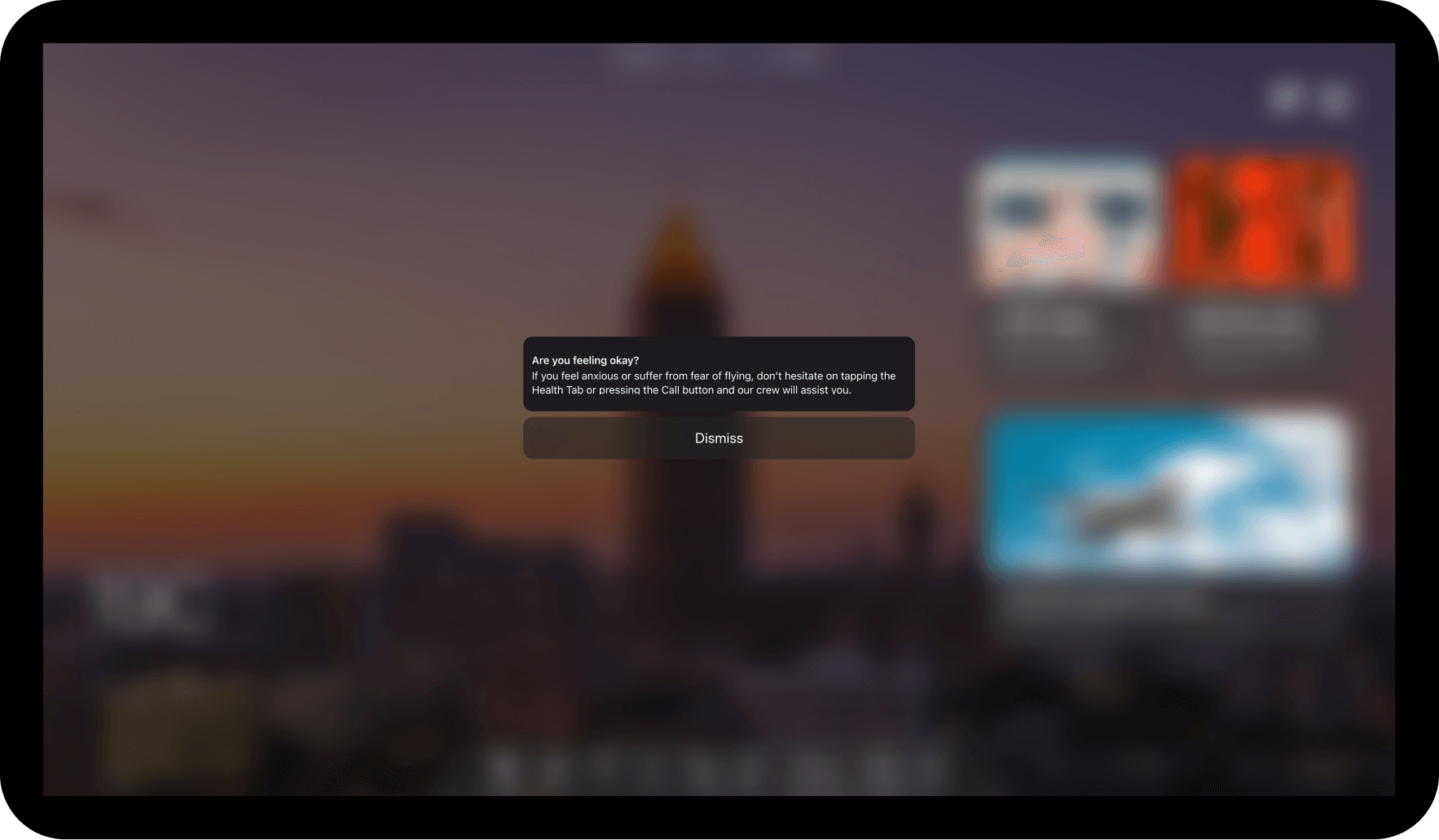 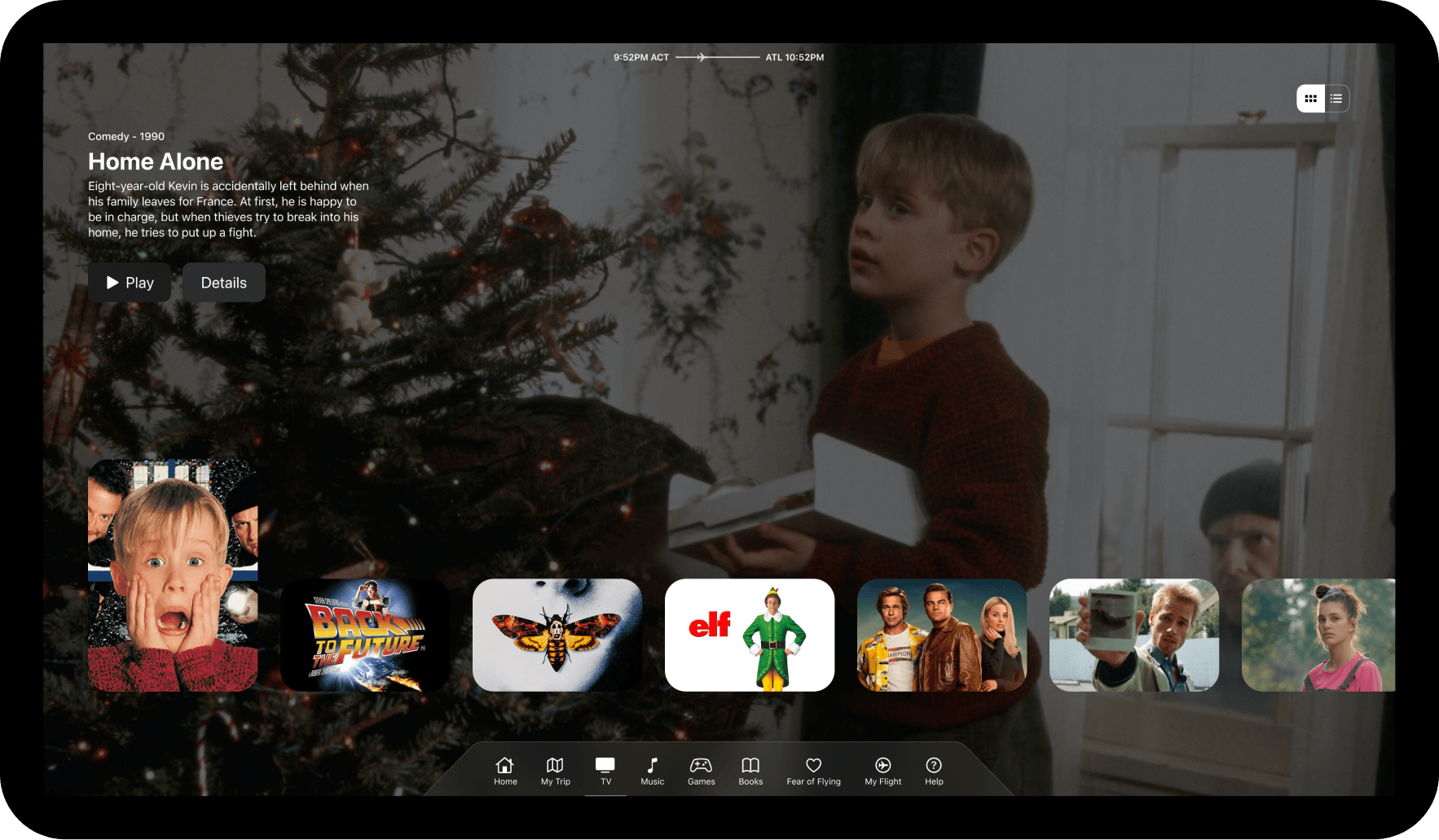 It was a really nice and rewarding experience to understand what fearful fliers feel, together with designing a way that might help them reduce their anxiety and fear. There are also things still to be done. This means conducting some tests with users, seeing how they would respond to the features, and then recording their feedback.