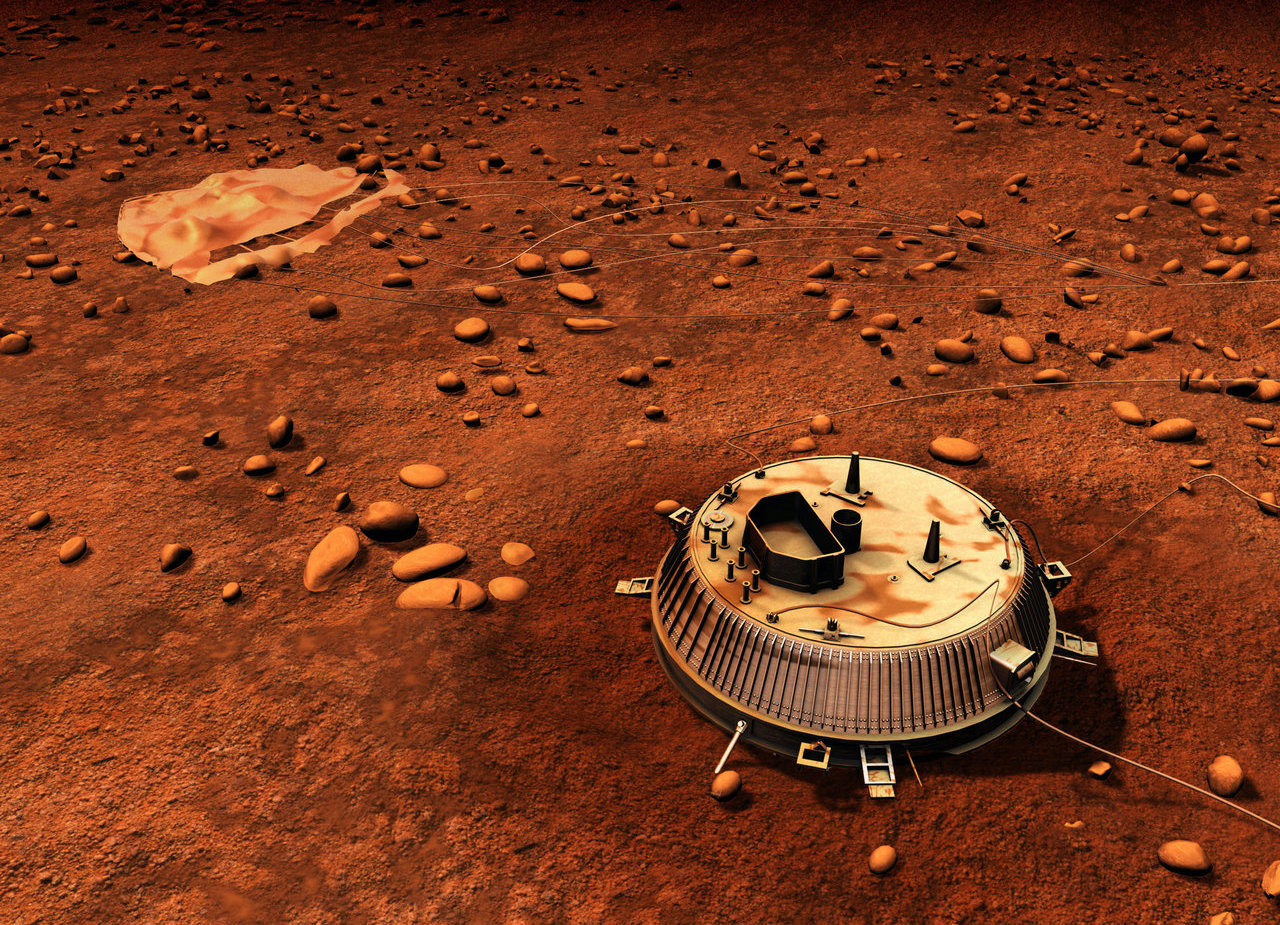 In October 2019, I decided to join the NASA Space Apps competition together with some friends: Matías and Candelaria. We only had 24 hours to pick one of the challenges, find the best solution to it, and give our pitch to the judges.

This consisted in creating an app to pilot an unmanned aerial system (UAS), such as a NASA space drone, utilizing the 6-axis gyro sensor within a smartphone or tablet. None of us had a technical background in science or space-related things. This made us decide to approach this challenge in a different way than what it was supposed to. Instead of creating a real app, we had our main focus in designing a user interface that would meet its users' needs. We strongly believe that empathizing with them is key to build a good product. 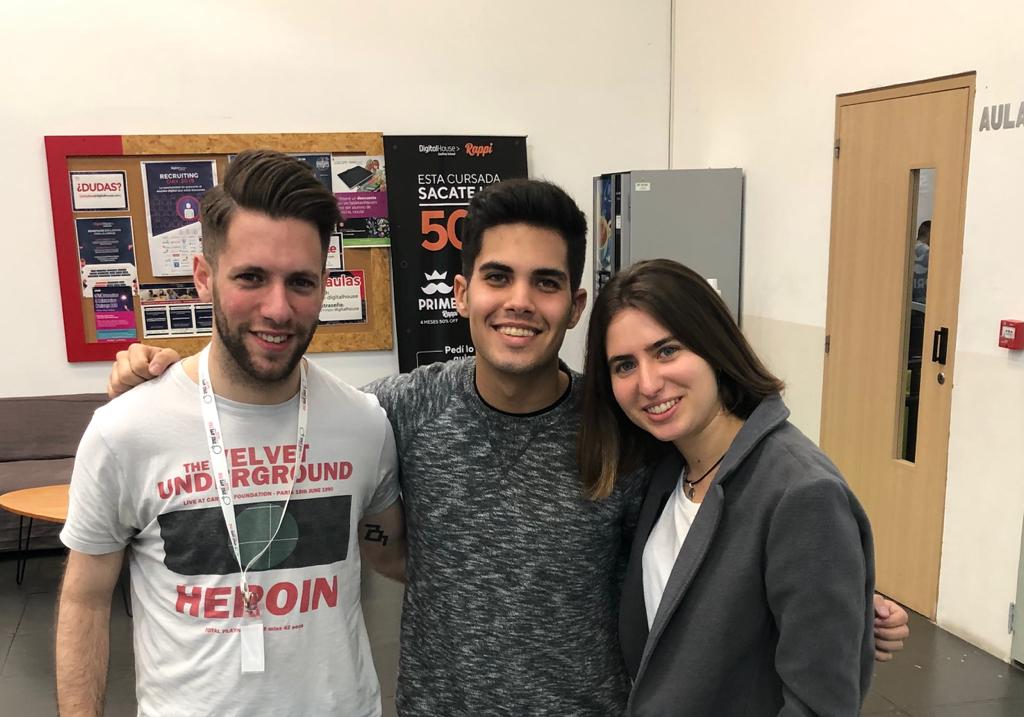 Here we are, the Neutron team right after kick-off. We knew nothing about space!

We only had one day to do it, so we decided to split it in three: learn and research, design the interface, and prepare our pitch. We spent almost half of our day on research papers by NASA and learning about different planets, drones, atmospheres, and what potential hazards might occur to them. We also had the help of César Bertucci, a scientist who worked on NASA's Cassini–Huygens space-research mission. He told us about the similarities of exoplanet Titan with Earth and how it would be a good place to fly a drone.

Look at the second photo: we made it to IBM Argentina's Twitter! I know I look so serious... but I was really focused 😂

During our intense learning phase, we found this extremely useful research already made by NASA on UAS pilots and their experiences while flying. Based on this study, we were able to define a persona who had specific characteristics and needed special on-screen information, such as:

But... there were some unexpected problems!

By the end of the day, we realized that it is not the same to fly a drone on Earth than flying on the Moon or on a different planet. Are there any potential hazards? Can a drone fly in different atmospheres? Every planet has different characteristics. Also, the research paper we found was made only with pilots who were flying on Earth. We had some pretty good user insights, but still nothing. We thought of giving up. But after thinking for a while, we came to a discovery.

The original challenge has a flaw. Off-world planetary exploration will always have delayed communications, so it is not possible to pilot a drone in real-time with an app. 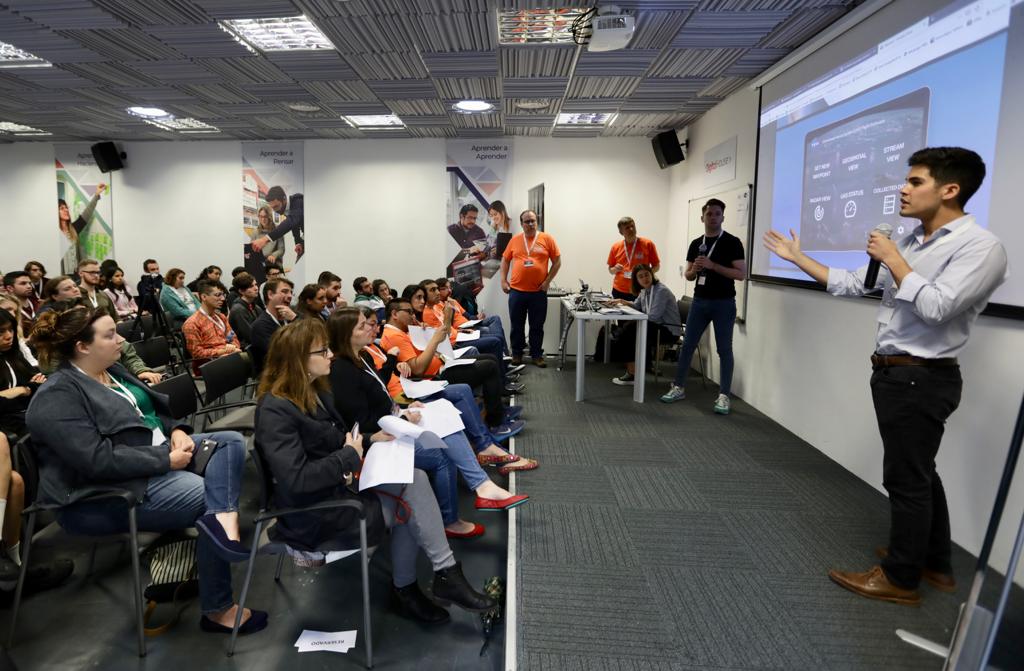 It was turn to give our pitch. Fun fact: we finished our project 10 minutes before that moment!

It was Sunday morning. We only had three hours to finish our designs, slides, and pitch. Among the judges, there were people from CONICET (Argentina's National Scientific and Technical Research Council) and the Environment, Science, Technology, and Health Office of the U.S. Embassy. Finally, we came out with an alternative solution. After César's advice, we ended up choosing Titan as our destination to fly the drone.

Due to delayed communications, the app would let pilots simulate the desired route of the drone by using the touch screen + gyroscope of a tablet. 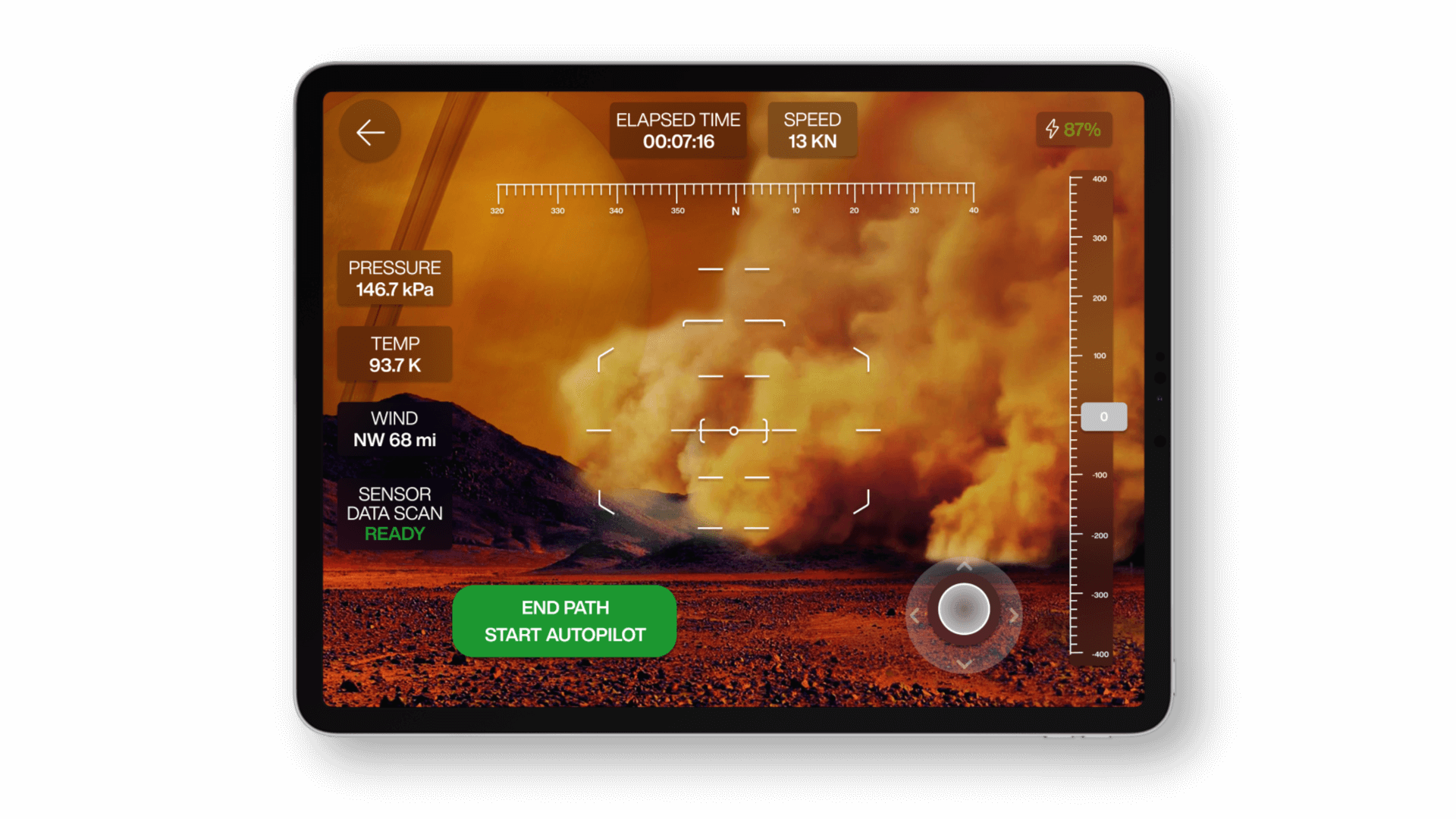 We know that by analyzing the collected data from Cassini–Huygens, a "map" of Titan's surface can be created for the pilots to fly. So instead of doing it in real-time, pilots can simulate the flight by using the touch screen + gyroscope of a tablet. After the simulation is done, there will be a live stream available (in our case, with the 80-minute delay on Titan) of the path with both cameras: geospatial or stream view. 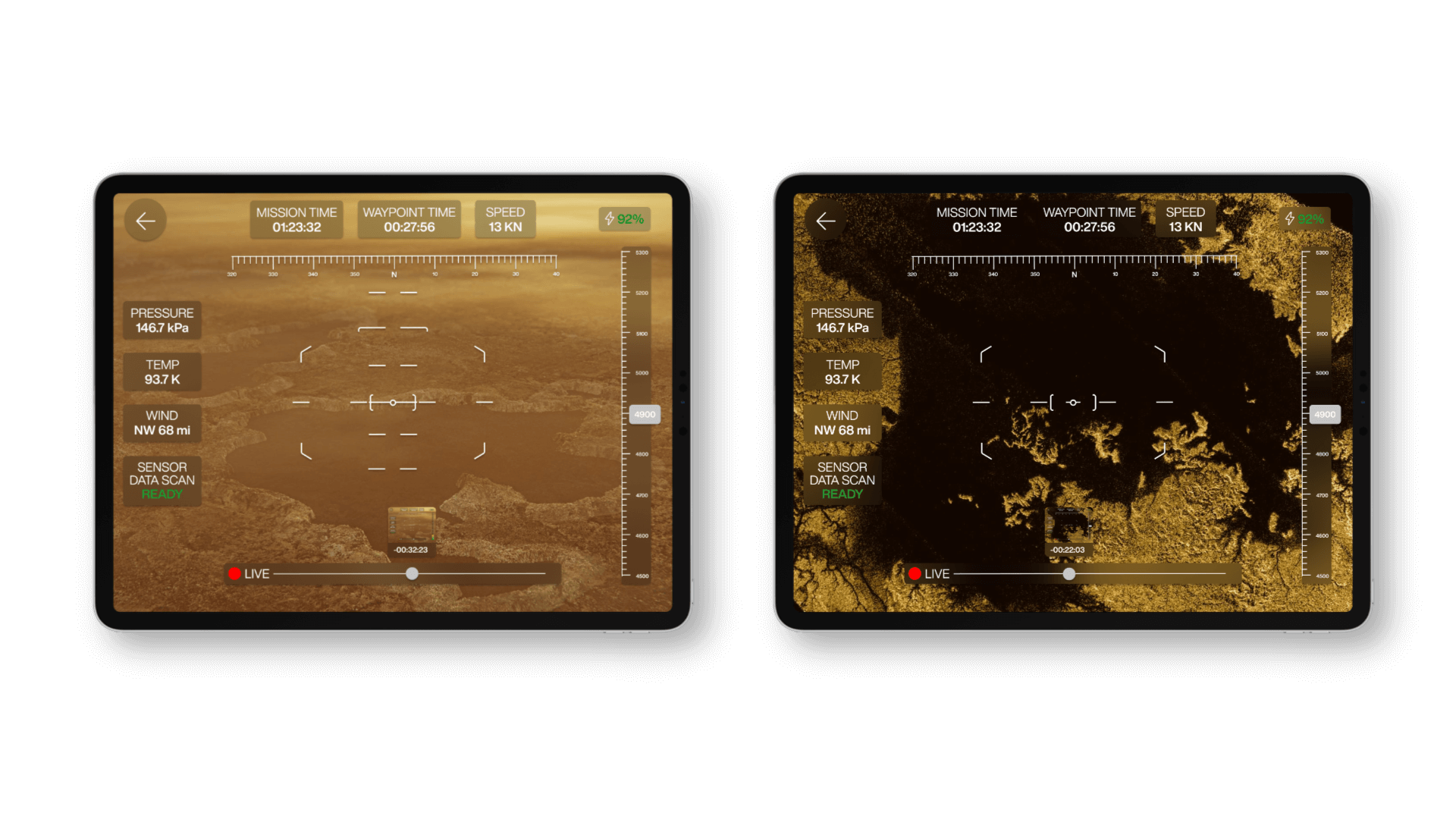 Live stream with both views: geospatial and stream.

What about any potential hazards that may occur while flying with an 80-minute delay? They should be planned ahead of time so when any of the drone sensors detect any of these, it will automatically land and wait for new instructions from Earth. 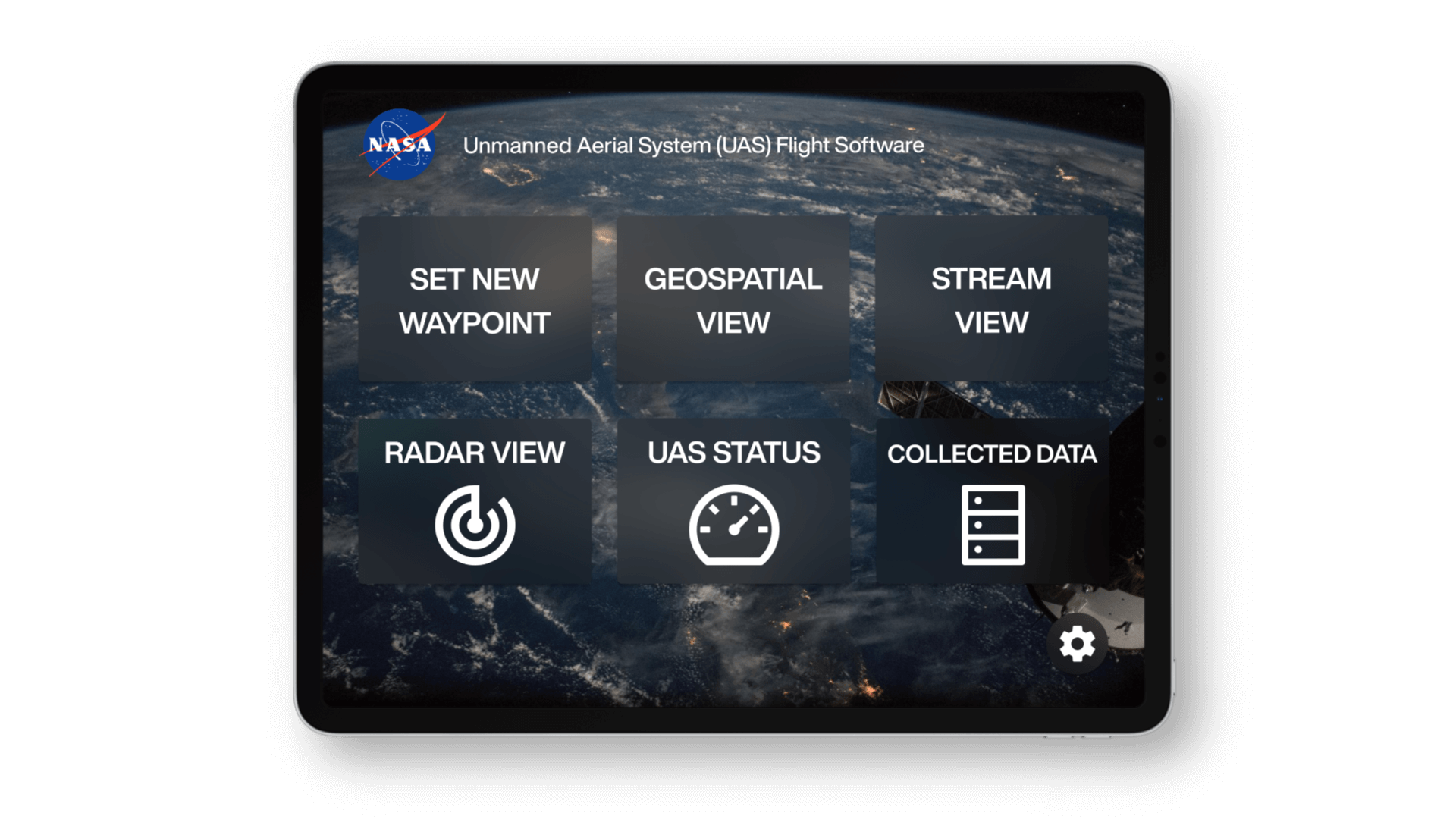 I really enjoyed working on this challenge, which helped develop my existing skills while also learning a lot of new things. I'd love to thank Matías and Candelaria for their great work, as well as César for his mentorship and the great support that we received from the Space Apps's team. Unfortunately, we didn't make it to the finals but it was a great experience working together as a team.